Chesa and I left everyone to begin our full country road trip from Dunedin, the bottom of the south island, to Auckland, the top of the north island. 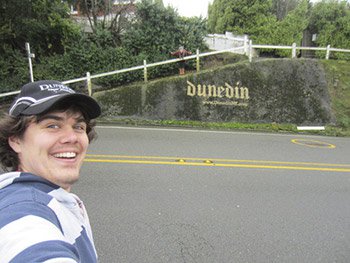 Our first order of business though was to bring our car up to Christchurch to be sold. Remember, our car was on the verge of death so I was extremely worried we were not going to make it. We ended up making it and the guy who was buying the car left the money with his friend along with a piece of paper I had to sign. After I signed it and had the money in my hand, I had the biggest sigh of relief I think I have ever had… so, we had a celebratory beer. 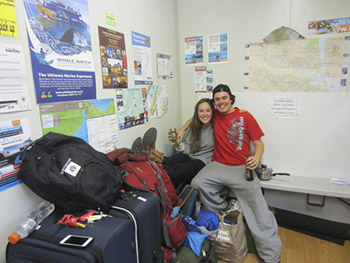 So now Chesa and I went between renting cars and taking buses the rest of the way up the island. On our way to Picton, the top of the south island, we were on a bus passing through Kaikoura in the middle of the night when the bus driver pulled over. He proclaimed that the roads ahead of us were washed out and we could not continue our trek north that night. So we found a hostel to stay in, but the power went out because of the storm.

The next morning, we resumed our travels as we finally made it up to Picton. Here, we were supposed to couch surf with a police officer right outside of town, but when we went to go rent a car, the lady working there said we could stay with her and she would drive us around everywhere for free. So we decided to stay with her, her husband, and 2 children for the night. 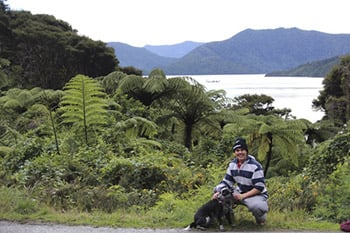 Well, what we thought was going to be a one nights stay, actually ended being a four night stay because the ferry that runs between the two islands was cancelled. This was due to 15 metre swells… yes that is 45 foot walls of water!

People were saying it was the worst storm they had seen in over 50 years. So we decided to use our time there to explore Picton a little bit. We walked the dog around to see what kind of views Picton had to offer.

The motto I had in New Zealand was that even when things went wrong, it was completely okay because something else unexpected would always creep up and we would all make the best of it and sometimes, maybe even have a better time than originally thought we were going to have. We were fortunate to have such a nice family to stay with and when the seas finally calmed down, we headed up to the north island! 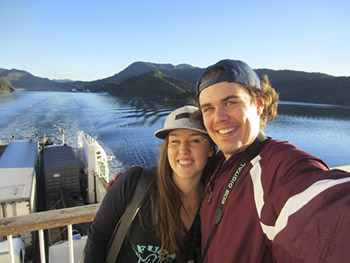 “This is the last picture I took of the south island…Goodbye Dunedin!”