We made it!! I haven’t been to the north island since we flew down from here with Arcadia five months ago.

Chesa and I are in Wellington as we are reaching the final stretch. We were fortunate enough to be couch surfing again but this time with two Canadians who are down here for the adventures. Amy and James told us to be ready for what they had to offer us in Wellington.

Making the most of Wellington

We had no idea what was in store for us, but we were certainly excited. Wellington is the capital of New Zealand and it is one beautiful city. The first night, we went to the grocery store to grab some beer for the night and on our way there, while there, and on our way back, we found people to come rage with us back at their apartment!

On our way up the elevator, someone says, “Hey, I think we’ve exceeded the person limit in this thing”. But of course everyone says that is fine… until we heard a loud bang and then the elevator stops moving!! So what is the only thing I thought of doing?? Take a picture of course! 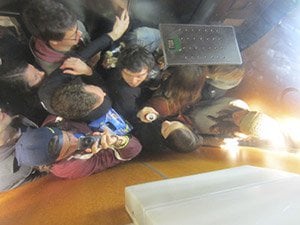 We were stuck in there for about 10 minutes, completely not able to move at all. Luckily, we had one person who didn’t fit in the elevator and when he saw that we never ended coming up, he figured out that we were stuck.  He ended up using a piece of drift wood that Amy and James had as a centre piece on their kitchen table to pry us out as we pried with a skateboard from our side. As the doors opened, we all dominoed out of there on to the floor.

It was quite a scene I must say. We ended up having a great party and we met some really funny people that night.

The next day, we walked all around the city and we decided to go to the beach for sunset. Remember that huge storm that stranded us in Picton? Well we definitely saw the remnants of it in Wellington. On our way to the beach, we came across a road that was completely destroyed. Also, this was the only road to get down to the beach on so we had to find another spot.

We ended up fixing it, but we were running out of time! The sun was setting quickly. We finally found a spot on the side of the road that we pulled over on to watch it.

The next morning, we all got up for a sunrise hike to the top of Mount Victoria. It was a decently hard hike to do when you first wake up in the morning, but the view was unbelievable when we finally got up there.

This was to our left, the city of Wellington with the moon setting: 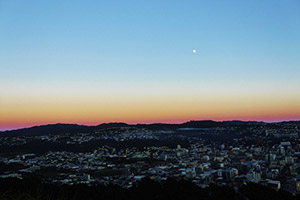 This was to our right, the sun rising over the mountains: 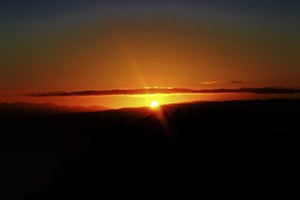 This was the start to a beautiful day. We then went home and ate a massive English style breakfast to get ourselves ready for a long day. We went to the Red Rocks after breakfast because James said we couldn’t leave Wellington without seeing them. We hiked along the beach for a couple hours and just took in the natural beauty of this place.

Where in America can you see ocean waves crashing up on the bases of snow covered mountains? 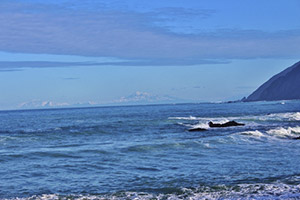 We saw a whole colony of sea-lions too! There must have been over 100 of them all around us! 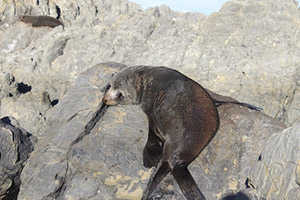 Chesa and I left the next morning to head up to Hastings, where Chesa’s Kiwi Host (and basically my second Kiwi Host) lives.  Rose was nice enough to offer us a place to stay when she found out that we were trying to make it up to Auckland.

Rose brought us to the beach to walk one of her dogs and after that, she brought us to a massive waterfall. As we walked around, I started thinking about how different the scenery is going to be for me in just one week. The trees, plants, animals, and climate were all going to be back to ‘normal’. I took in Mother Nature’s beauty the best I could as Rose brought us around. 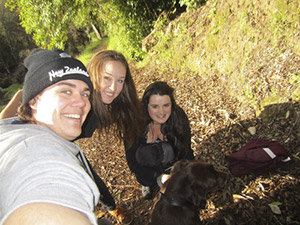 The most beautiful place in New Zealand

Rose, knowing my absolute love for sunrises, brought us to the best spot the next morning. I have to say, this was one of the top five places I have been to in New Zealand. The view from this point was 360° degrees of amazing. 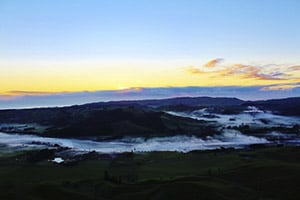 I cannot describe the sheer beauty of this spot, but I will try to lay it out the best I can:

The sun was rising over the mountains in the east and because of the cold, crisp air, the warm river produced a rolling fog that covered some of the ground. To the south, there was a ridge line that on either side was a straight down cliff that was about a kilometer high. To the west was snow covered mountains that were lighting up orange with the glow of the sunrise and to the north, it was the city of Hastings with mountains behind it. 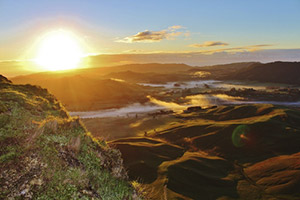 I took some of my favourite pictures while on the top of this peak. I hope you enjoy them as much as I do.