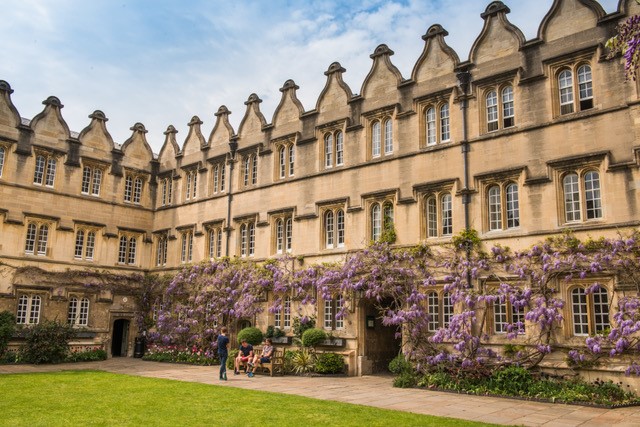 In this post I would like to tell you about my experience of an Oxford College Ball, an event which is normally held in the early spring every year inside some of the Oxford colleges (actually every single college organises its own ball every other year or so, but having more than forty colleges at Oxford it is quite easy to find a huge number of balls taking place every spring).

In fact, my Worcester friends and I decided to go to Exeter College ball (Carnivalia was the theme of the event), which was attractive and not extremely expensive.

I want to start off by citing a line I read in a local newspaper “The Oxford Student” which read:

“The hour before a ball commences sees young men suited and booted to make their elderly relatives proud, and women wearing an extraordinary array of beautiful dresses and impractical heels”.

Believe me, this sentence is extremely realistic.

My housemates and I spent something like two or perhaps three hours preparing ourselves for the ball!

The dress code was black-tie, which is quite formal but not too much, and I, along with the majority of people who were there, had to hire a dinner jacket from a local shop here in Oxford.

Furthermore, I spent at least half an hour in front of my laptop watching YouTube tutorials on how to tie my bow-tie. (If you are lazy you can wear a fake tie, but they look awful compared to the proper ones!)

All in all, an Oxford ball can be considered one of the best experiences you will take away when you go back home.

First of all, because it is the only night where you will find good free food, endless drinks, a funfair and lots of music and dancing all wrapped in one. Just be careful not to drink too much – the best you can get from such an event is when you are sober! And the day-after hangover is painful and annoying! (Take it from me, I’ve found myself in that situation a few times in my life, and always my biggest regret is losing the best part of the party!)

Speaking again about the ball itself I want to stress that its value depends a lot on whom you go with.

If you go with a group of good friends, as I did, then it doesn’t matter that you’re going to a college ball that isn’t your own. (They’re not cheap: £60 for a cheap ball, £130 for a renowned one) but in conclusion, I would say that the combination of good friends, tasty food, a bit of alcohol and a lot of music and dancing can yield a lot of fun. Not to mention the unforgettable memory of an Oxford college ball.