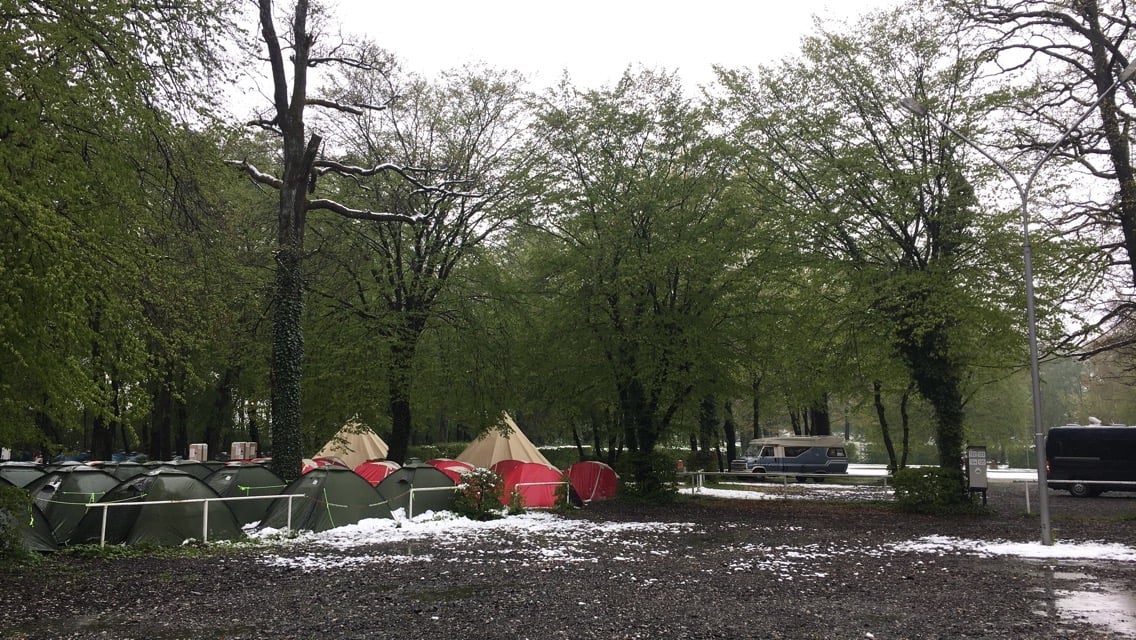 With one last trip out of the country to take before wrapping up the semester, my friend Nat and I decided on a camping trip in Munich for their annual Frühlingsfest, or Springfest, for a long weekend. This was our last trip, our big farewell, going out with a bang, and we couldn’t wait.

We went with bus2alps again, an incredible student travel group, and camped with Stoke travel. We packed our backpacks, printed our plane tickets, and caught a Thursday afternoon flight for a trip we didn’t yet realise would be the craziest one yet.

Arriving in Munich at four in the afternoon, we had been given clear instructions on which train and bus to catch to get to the campsite. My German is a little rusty, so we were relying mostly on the directions we had. However, we were not yet told of a fire that had caught in the train tunnels that day, throwing the entire schedule out of whack, and we started our journey blissfully unaware. What was meant to be a simple one hour journey turned into train hopping, train missing, getting on the wrong train, sitting in the rain at a bus stop at night – a four-hour long adventure to get to our tent. Finally reaching the site, we got into our sleeping bags exhausted, ready for sleep.

Mother nature had another plan for us, and while I tried to doze off, it began to snow. Even under two sleeping bags and all of my clothes from my backpack, I still shivered violently and failed to ever fall asleep. For the second, third, maybe tenth time that day, a small voice in my head said, “What have you gotten yourself into?”

The next morning dawned bright and early with the speakers at the bar belting out Ed Sheeran’s “I See Fire” at 8 am, and we all immediately started drinking beer and sangria with breakfast to warm ourselves up.

Meeting a couple of other girls, we made our way to the festival, where it was raining, and sought refuge in one of the beer tents. I’m firmly in the belief that beer tents are liminal spaces, where time doesn’t exist. We spent over four hours in that tent, standing on a wooden table with our new German friends, drinking our steins, singing and cheering, clapping and almost falling off the benches as we yelled “Prost!” Leaving at ten or eleven, we regrouped at the hotel room the girls had booked for the night and then hit the German clubs, returning at 5.30 in the morning, only to wake up at eleven and do it all over again.

The weekend is a haze of wearing a dirndl, drinking beer, eating pretzels, and making new friends every ten minutes; in short, the most fun I have ever had. Come Sunday afternoon, Nat and I left the campground, checked into our hostel and spent the rest of the day touring Munich. Catching our flight home the next day, we were utterly decimated, exhausted and sore from sleeping on the ground, but more content and happy than we ever had been. We wanted a perfect goodbye, go big or go home, and we definitely got it. Sure, we had to hibernate for a week or so after, but it was well worth it.

Previous articleAdventurous Student? Alternative Career Options for You
Next articleGood Skills Up Your Sleeve?