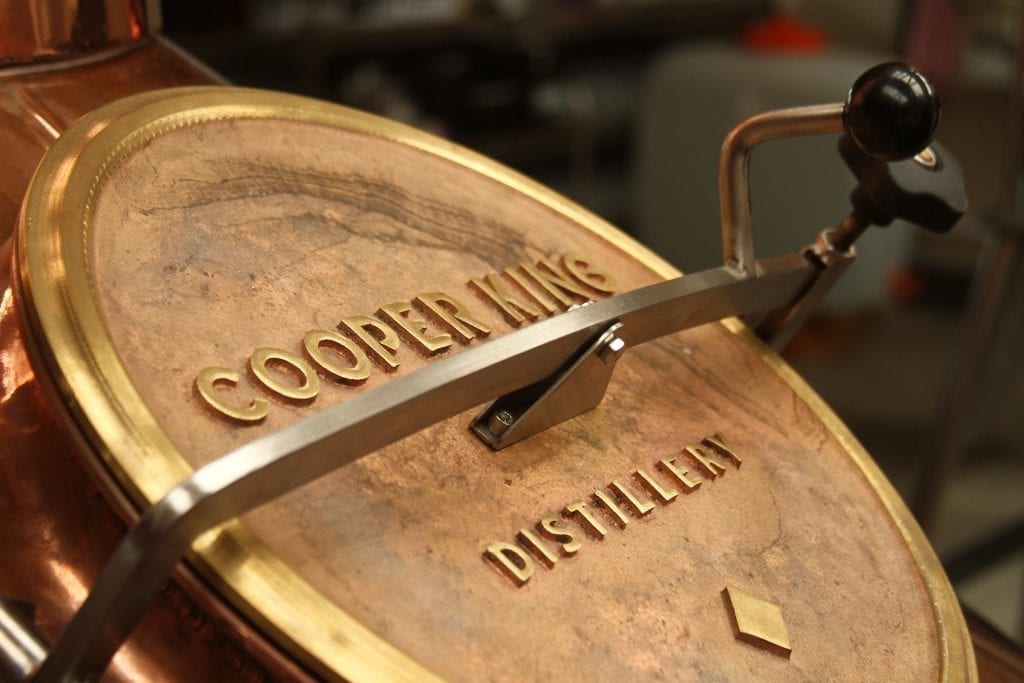 ‘In the spirit of adventure, we left our jobs in the UK and set off for the freedom of travel in Australia. We returned a year later with a big idea – to build and run our own whisky distillery.’

Distilling gin and whisky from awe-inspiring ideas and adventures

Cooper King Distillery is a self-built, family-owned gin and whisky distillery in the heart of Yorkshire. Crowd-funded and self-built on the site of an old stable, the distillery produces award-winning sustainable spirits underpinned by craftsmanship, honesty and adventure. It is owned and run by Chris and Abbie and their journey so far exemplifies how pathways through life can diverge from the expected in extraordinary ways.

Dr Abbie Neilson is a former scientist and Chris Jaume a chartered architect. But in 2016 they founded Cooper King Distillery which is powered by 100% green energy and is going from strength to strength. Their degrees didn’t take them into the type of labs or design studios you might expect, but they did play a big, big part in taking them to where they are now.

Abbie obtained her PhD in 2013, a year after Chris qualified as an architect. Chris joined an architecture firm and Abbie Neilson was working as a research scientist after completing her PhD in cell biology. But the pair quickly became restless.

‘Before we decided to pack it all in and start again, we were settling in to our first “real jobs” after university: in an architectural firm and as a research scientist. We were living in Leeds, working long hours, and those around us were beginning to get married, have kids and buy houses. We both felt there must be more to life than that so we decided to disrupt things. With a desire to leave the rat race we both quit our jobs and bought one-way tickets to Australia, seeking sun, sand and adventure.’

Before we decided to pack it all in and start again, we were settling in to our first “real jobs” after university: in an architectural firm and as a research scientist.

Changing tunes (to the beat of a different drum)

While travelling around Tasmania, the couple visited the island’s small, handcrafted-whisky distilleries, one of which had just won an award for the world’s best single malt. This signaled the emergence of Tasmania as a world-class whisky producer and prompted a whirlwind tour of the island’s eight operational whisky distilleries.

‘What we discovered blew us away. Small and innovative operations run by passionate people making exceptional spirits by hand, many of whom had no industry background. We discovered that to set up a successful distillery, you did not need millions of pounds, nor did you need years of industry experience. We had found a challenging venture that we could both work on together, to indulge our love of flavour. With a mission to bring our discoveries back to Britain and armed with a wealth of knowledge gathered from across Tasmania’s now internationally acclaimed New World whisky distilleries, we returned to the UK to establish Cooper King Distillery in Sutton-on-the-Forest, North Yorkshire.’

We discovered that to set up a successful distillery, you did not need millions of pounds, nor did you need years of industry experience.

Abbie was struck by the simplicity of some of the operations they saw: ‘The first distillery we visited belonged to a farmer who’d grown too much rye one year and so decided to have a go at making whisky. He’d made his own copper pot still, using fallen power lines in an old shed out the back. Before going to Tasmania, we had assumed that making good whisky meant being in Scotland and spending millions of pounds. But seeing such resourcefulness and innovation got our minds whirring away about bringing the idea back to Britain.’

The first distillery we visited belonged to a farmer who’d grown too much rye one year and so decided to have a go at making whisky.

They spent the next 18 months travelling around Australia, learning how to start a business from scratch and Chris explained how their research led to a concrete plan: “we went to many talks and workshops at the Melbourne Business Festival and spoke to a great craft brewery near where we lived in Melbourne to get some tips. Then we came back to England armed with a business plan and had to try to convince friends and family that we hadn’t lost the plot, and that this was a viable venture.”