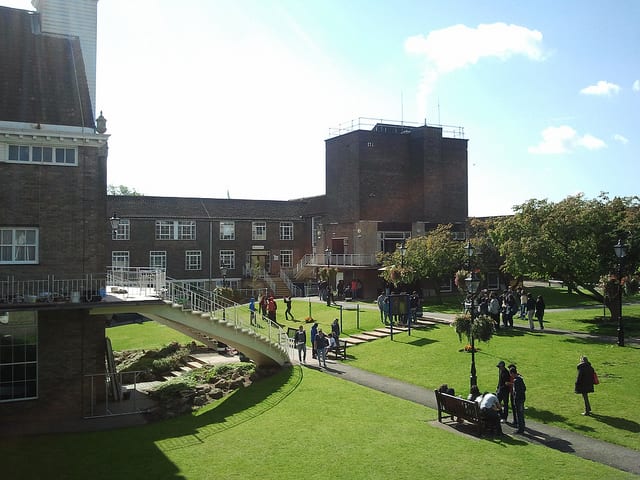 Dominic studied at Oxford Brookes University where he did a joint honours degree in English and History on their famous modular degree programme.

I had a great time in Oxford Brookes, where I studied at the Gipsy Lane, Headington Campus. I loved the modular nature of the course (which they still do) as it allowed me to select areas of study I fancied; this included options to take modules completely outside my degree areas and I took photography and the history of art as additional subjects. I also enjoyed taking a joint BA – I chose History which, despite my misgivings, was as compelling as my first subject, English Literature. I was a mature student with a diploma, so I had to attend and interview, but the approach Oxford Brookes took was positive, friendly and welcoming.

My first meeting with Oxford Brookes.

It’s a long time ago, but I remember an interview with an informally dressed member of the Department of English and Modern Languages – I think they wanted to interview me because I had a business studies diploma rather than A levels – and he seemed both interested in, and impressed by, my two years’ work history and I felt that I was rather waved through on the basis of that. But the memory plays tricks, so perhaps there was more to it but my memory isn’t at fault when I remember how open, welcoming and encouraging everyone was that I encountered at Oxford Brookes.

Lecturers that left a lifetime legacy

In English, we had a range of different lecturers with very distinctive styles. I remember a jointly-taught lecture in which one tutor made fascinating cross-references between Hamlet, The Tin Drum and All Along the Watchtower, which the other lecturer humorously derided as hippy nonsense. Another lecturer brought in a bunch of grapes – I think it may have been Caroline Jackson-Houlston – in order to demonstrate how difficult it is to ‘burst Joy’s grape against his palate fine’. Her love of Keats and the Romantics lingers with me still and the fact that this happened 37 years ago shows what an impression it made. We all gave it a go and it was, indeed, trickier than it sounded. I think my most inspiring tutor was a neat man called Colin Pedley – his lectures were fascinating and his lead on our little tutorial group studying Joyce’s Ulysses opened up that difficult book for a lifetime of revisits. Another lecturer who, I think, specialised in Shakespeare, was able during his lectures to quote extraordinarily long sections from the plays, bringing those texts to life in declamatory brilliance.

My international life in the heart of England

Studying within a truly international environment while based in the heart of England was a wonderful combination. I shared a house in Cowley, and my housemates included a Malaysian, a Yorkshireman and a cider enthusiast from Somerset. Even back then there was a strong sense of internationalism at Oxford Brookes with people from all over the place which added to the overall sense of broad vision. The student bar brought a lot of us together – the Guinness was excellent – and my afternoons tended to blur and fade as a result; I don’t think I took a lot away from afternoon lectures. I used to drive an old Morris Oxford in those days and it was great to have a car to beetle around the countryside – Woodstock and Blenheim Palace, Abingdon, the Slaughters and many other places provided pubs and chill-out options although Oxford itself was hard to beat.

We used to use a pub called The Isis, located right on Iffley Lock on the Thames, quite a bit – a great spot for bucolic drinking – and I think I had my first Oranjeboom at the Magdalen Arms one cheery sunny day.  My girlfriend, Clare, was a vegetarian (still is!) and such was the power of her influence (although the chicken factory job before I came to Oxford might also have had something to do with it) that I converted and remain one today. We used to eat in a tiny Chinese restaurant on Cowley Road.