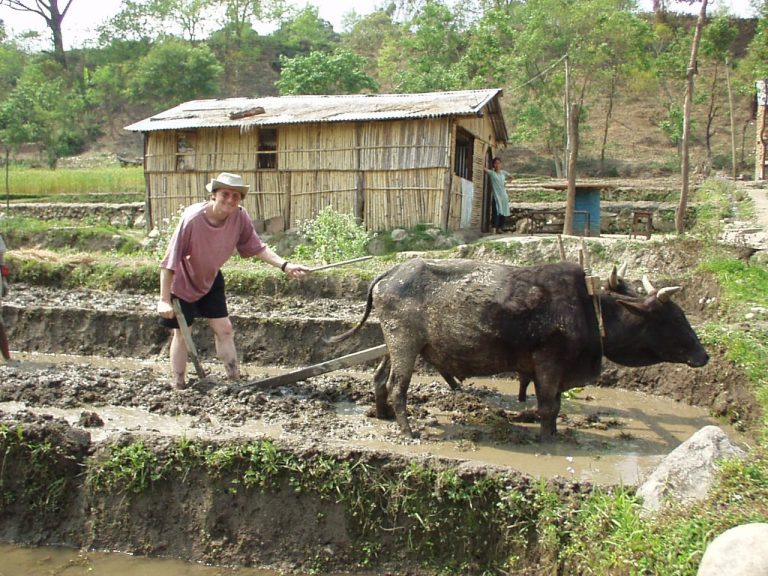 Dominic has been in and around education all his life. It placed him in the Himalayas for three years, took him to Taiwan, to Spain and now to a cottage on an island in Essex. Underpinning this peripatetic career are the qualifications he took along the way. This is a summary of his journey so far.

To university via the chicken factory

It took me a while to track him down, but when I finally arrived at his cottage overlooking the sea at the end of a farmer’s track, Dominic Jaume was sitting in the garden on a swing seat listening to the last test at the Oval. In some ways, this circumstance seemed to underline the message that came through my conversation with him: you never quite know where your educational choices will lead you. Dominic has just given up his job as a secondary English teacher to work freelance in education and journalism, but I started by asking him why he went to uni in the first place and why he started late (he entered HE 2 years after finishing college).

“Well, it wasn’t planned but more as a result of previous wrong decisions. I did a business studies diploma and imagined I was destined for industry but I was the worst salesman in Christendom. I ended up in dead-end jobs: working in the Sun Valley Chicken factory in Hereford was the nadir that pushed me into doing a degree. That and a life-long love of books. Looking back, I’m amazed I lasted six months at Sun Valley, but the prospect of leaving the stench of wet feathers and death behind to spend three years reading and discussing literature was not just enticing but became a desperately needed escape.

“The degree I got from Oxford Brookes University (it was a polytechnic in those days) provided far more than an escape from drudgery; it transformed my life in ways I couldn’t then have seen.”

Yet when I look back now, the degree I got from Oxford Brookes University (it was a polytechnic in those days) provided far more than an escape from drudgery; it transformed my life in ways I couldn’t then have seen. It wasn’t just a degree – there is something extraordinary about walking through bedewed meadows towards Oxford at the crack of dawn and hearing from the chapels the strains of ethereal choral singing rising through those dreaming spires into the ether. Those surroundings somehow lent extra power to the intellectual vigour I experienced in my studies.”

Eschewing conventional routes, what followed next was a bewildering sequence of events: two years as a London dispatch rider; teaching James Joyce in community groups through the Open University; travelling and working around the world; and ‘generally shaking the dust of academia out of my system’. The one conventional choice he made was to buy a flat which he then swiftly lost during the financial crash in 1993 ‘That was a difficult period’ he admitted.

“I split up with a long-term partner around the same time – although I don’t think the events were connected – and I spent 6 months wintering in a VW camper van in a friend’s field in Herefordshire trying to re-group. In the end, I decided to go back to study as a way of moving forward”.

Dominic enrolled on a TEFL course at International House in Hastings and, while teaching there, was offered a job at a school in the Carpathians in Poland. ‘I was about to accept and head into the darkness of an East European winter when I succumbed to the allure of a flamenco-dancing Spanish woman and realised the bright lights of southern Spain would be better for my mental well-being.’

“I spent 6 months wintering in a VW camper van in a friend’s field in Herefordshire trying to re-group.In the end, I decided to go back to study as a way of moving forward.”

The dazzling light of Andalucia

‘In fact, that TEFL was one of the most life-changing choices I ever made; I met some amazing people – students and teachers – during that course and the teaching that followed, and it wasn’t a difficult decision to dust down the VW, pack it full of CDs and books and head across the Bay of Biscay to begin new adventures in Spain.’Dominic was coy about some of those adventures, but after travelling slowly down through Spain, he ended up in Granada where he lived and taught for the next five years. He acquired fluent Spanish, met some inspirational people, ran a (short-lived) ceramics and olive oil business and built up a cohort of private students which he taught from a carmen in the Albaicin overlooked by the Alhambra Palace. Why on earth did he leave?

“Tricky one,” he admits, “but it was almost too easy, too languorous. I was soaked in perpetual sunshine, warmed by wine and treading water with my teaching. I felt as if I was atrophying mentally and so I chose about the most diametrically opposed option I could have done – I enrolled on a PGCE at Bath Spa University. It was a bit like plunging from a sauna into an ice bath – but in a good way.

I was back in England and embarked on a very demanding course that included lots of teaching practice in some difficult schools around Bath and Bristol – a far cry from cosy one-to-ones with Spanish uni students in Granada. But it was brilliant – I loved the intellectual challenge and my tutor, Barbara Imrie, had a razor-sharp intellect, was a superb teacher and motivator and pushed me hard – she forced me to write all my essays on a computer which modernized my habits. Bath Spa’s campus is a bucolic dream and a perfect place to wander out with a book to relieve the intensity of study.” “I was soaked in perpetual sunshine, warmed by wine and treading water with my teaching.” It was a bit like plunging into an ice bath from a sauna – but in a good way.”