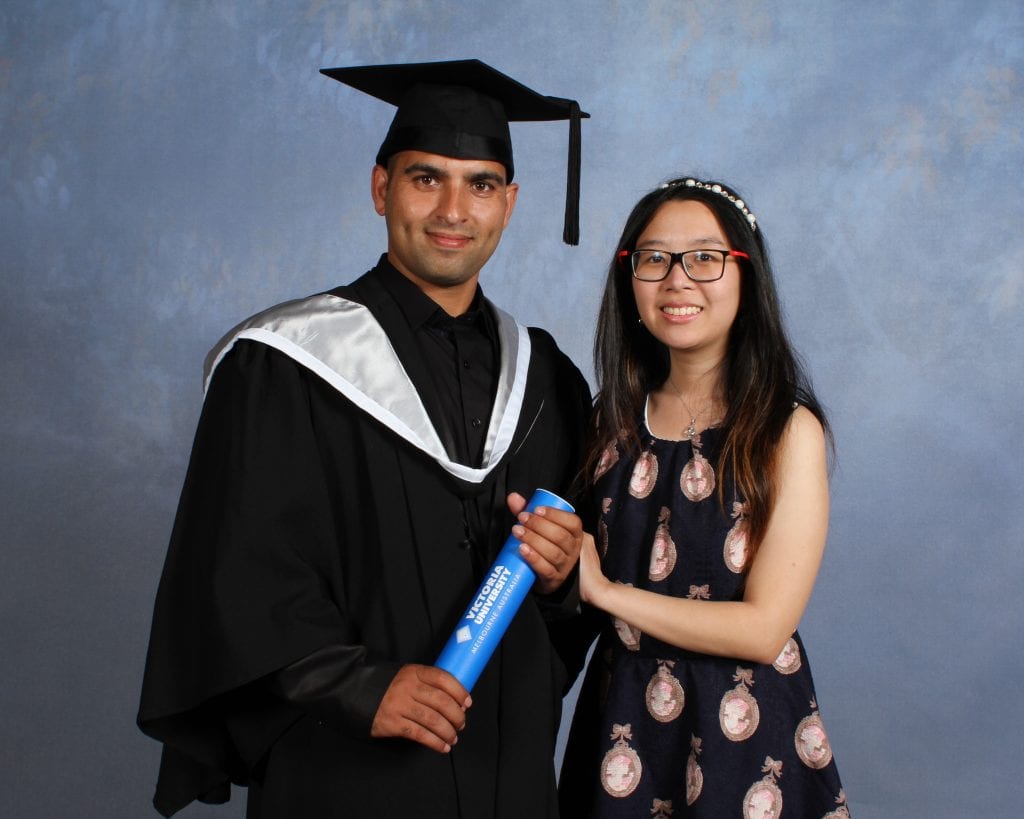 Ayaz Ahmad completed a Bachelor of Engineering (Electrical and Electronic Engineering) (Honours), at Victoria University, 2014-2017. We asked him about the course, student life, achievements and some of the challenges he faced.

What made you choose Victoria University?

There were a number of factors that led me to choose Victoria University: When I decided to come to Australia, I considered quite a few options, in terms of university, but I knew people in Melbourne so I started looking into universities there: financially, I knew VU was the cheapest for the course, very cost effective and affordable. I am an international student and financially, had to handle it myself and did not ask my family for support. In addition, VU campus is easily accessible and there were different options for my major. Course-wise, it connected well with what I wanted to learn. Melbourne was ranked the best city in the world for many years; it was the right choice for me to be at VU and in Melbourne.

What challenges did you face when you first came to Australia?

I am very flexible and adapt to new environments quickly, so for me it was not too challenging. I am also a positive, mature person and when I came to Melbourne I wanted to turn the challenges into opportunities. The biggest challenge was my English; I learnt English back in my country, but of course I am still a ‘second language’ speaker. The Australian accent was quite hard to understand and the way people spoke was a bit different, but that was only for the first few weeks – then I caught up with it!

The course you studied, how was that?

When I chose the course, I wanted to make sure of the employability outcomes-whether it was aligned with the industry I wanted to work in, after graduation. They offered a Major in Power and when I looked into all the units, most of them were related. I also did a unit in Telecommunications. In general, I really enjoyed the course. The way the units were set up had a good flow and set a great foundation for the next semester; it was step by step, so I felt comfortable moving up to the next level. It was easy and the teachers were very well-organised. One of the best things about the course was the practical aspect. I was able to apply a lot of the knowledge and skills I learnt, to my job. I learned from my mentor here, that it is very hard to find people who go from university to the workplace, with solid knowledge about the equipment and programs.

Apart from the mainstream course, I learned a lot of soft, and problem solving skills, since I had to do internships and group projects that required me to be more practical and sensible.

I had many friends during Uni times, as well as the teachers. Some of them, I am still in touch with; one of them is Akhtar Kalam, and I considered him my mentor; he was not just a teacher, but also a wonderful supporter. I also met my girlfriend through VU and we are still together after five years. This is probably the best thing out of my VU years. She is working in Western Australia, as a Civil Engineer.

Did you work Part-time during your student life?

I worked as a maintenance supervisor. The good thing about that job was that it was very flexible. I could work full time during the weekend and then study during weekdays. VU’s electrical units were flexible in a way that meant we could schedule our own time for lectures and tutorial sessions, so sometimes I studied 3 days a week, other times, only two and a half.

The thing to do, when you come to Australia, is to screen the job ads on Gumtree – it is very easy to search on that. It is quite hard to find professional positions but then I moved to ‘Seek,’ submitted my application and CV and got selected.