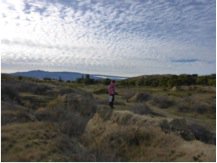 Studying abroad for a full academic year grants you enough time to complete your own independent research project.

I took a year-long class in the geology department called “Independent Field Studies”. Through this, I found an environmental geology project to do.

My excellent advisor gave me the opportunity to present the findings at a conference. I felt really lucky!

For my project, I made maps of the geology, vegetation, and soil chemistry at an abandoned gold mine. 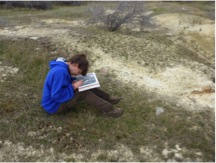 The leftovers from the mining processes come from old mine channels that were dug into the ground. That’s the reason for the steep slopes. The mining had also left large areas barren and exposed.

Both of these factors lead to a lot of sediment runoff, which is washed down the slopes and then fans out on the flat ground at the bottom.

The old mine is in Central Otago, which is an arid region, and this leads to salt encrustations forming on the fans of runoff. Some tiny, endangered salt-tolerant plants actually thrive in this environment!

Because they are so rare and endangered, the Department of Conservation in New Zealand made the old mine site a Scientific Reserve.

Luckily, the site does not need intensive remediation as there are no toxic elements exposed by the mining. It’s just really bare and really salty, and that counter-intuitively created a safe haven for some unique plants.

We used my data to argue that mine operations should incorporate diverse landscapes and soils during remediation in order to support diverse plants and thus increase biodiversity.

Many current mine remediation ends up leaving a site flat and only planting grass or a few kinds of trees.

I had to write a few reports about my findings. I also made a poster and presented it at the Mining Conference held in Dunedin.

Even though I was extraordinarily nervous to speak to professional geologists at a conference, it was also really exciting.

I received a free book and a complimentary bag as a gift for being a presenter! I even had snacks at hand while I stood by my poster and waited for people to ask me questions.

After talking to a few people, I was able to relax and I ended up immensely enjoying the experience.

I met some impressive people and had enriching conversations, and it was an amazing addition to my study abroad experience!

Previous articleLiving on the Remnants of an Ancient Volcano
Next articleDunedin: Wildlife Capital of New Zealand