The peninsula that Dunedin is built upon is comprised of rocks created by an ancient volcano.

This geologic history, along with the temperamental climate of the South Island of New Zealand, is responsible for the beautiful and dramatic scenery of the area.

One example of such natural beauty is a spot called the Organ Pipes at the top of Mt. Cargill.

In one afternoon, you can hike from the University in the city to the top of Mt. Cargill and back.

The Organ Pipes are columns of rock that formed as lava cooled and contracted, and though many of them have fallen over, it is a spectacular sight. They’re so high that you are above some clouds, but you can still see for a long distance!

If you don’t want to hike that far, you can also drive part way and then take a short 30-minute walk to them.

There’s a myriad of other beautiful places further out on the peninsula from Dunedin itself.

These places are almost always less than an hour drive and can be biked to on a day with good weather.

I took the following pictures at Allan’s Beach. Here, there are stunning seaside cliffs, which are made of lava injected into other rocks. For those who are more interested in wildlife, this is also a great place to spot penguins.

Another amazing beach I’ve been to is near a town called Aramoana.

It has sand dunes that you can sledge or roll down, and these dunes are built up against ancient lava flows!

The group in the fluorescent vests is the introductory geology class from the University who are on a field trip.

I’ve had the extreme fortune to be a paid teaching assistant for this class, so I’ve actually been paid to go to some of these gorgeous field excursions with them!

Even though student visas allow students to work for pay only if they are studying for at least two semesters (like I am), any student studying abroad can be taken on free field trips simply by taking an introductory class in any of the natural sciences.

The Pyramids at Victory Beach

To get to the beach, there was an easy trail through farmland, then over (or around) the Pyramids, and lastly across a marsh, which let out on the beach bordering the Pacific Ocean. 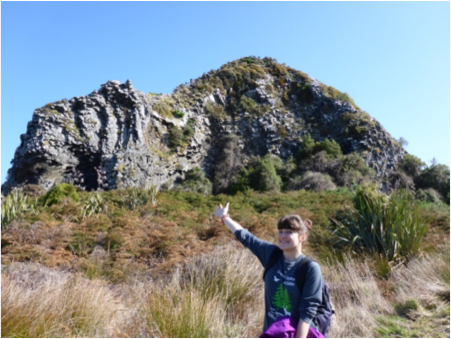