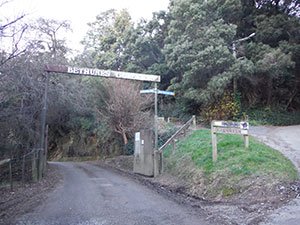 Enjolie Levengood
Enjolie is an American student of biology at the University of Otago in New Zealand. In her words, “I'm a complete nerd and I love to cook and eat”.
Facebook
Twitter
Pinterest
WhatsApp
Linkedin
Email
Print

Have you ever gotten the urge to just get up NOW and do something? Well, Saturday night, the international flatmates did. We wanted to go tramping (hiking) immediately.

Unfortunately, it was about 9 pm. So, after some hurried research on the internet and in our travel books we found a tramp: Bethunes Gully to Mount Cargill track. We sort of found a bus schedule to take us close. Then we went to sleep.

Well, after Olympic Power Walking and a little scrambling, we just managed to catch the bus…and then watch as it took us through the streets we just sprinted through. With that, we were pretty warmed-up for the walk and determined to get away from the bus.

The nice driver told us our stop and how to get to the track, and after a little confusion, we found it. So next time you want to go on a tramp, really know what you are doing to avoid being lost.

Overall, the tramp was wonderful, and I cannot wait to go on another, but, it was rather difficult at points because I had not been hiking for about a year.

So, I struggled with breath control going up. My naturally slower pace and multiple stops to take pictures gave me time to catch my breath, but it was still difficult.

Do not forget a water bottle, even if it is 5°C and lower (about 40°F). Hydration is key and it instantly gave me energy for the next steep uphill. Also, for me, the trek down was harder on the knees/hips, which I thought was worse than struggling for breath.

We took about 2 hours to go up and about 1 hour to go down.

We were exhausted and just wanted to finish and that rush led to a greater amount of pain the next day. So, use caution and take your time.

The minor pain (and sometimes giant stairs up to the mountain, which I hate) was worth it. On the way up, we saw many people, some with small dogs, big dogs, or small children (all were fitter than me). The views were gorgeous.

The trees would arch over the trail, ferns would form a canopy above you, mini waterfalls and rivers were constantly running near – and sometimes through – the path.

The ferns were a bright green, trees and their roots were various shades of brown that blended in with the moist dirt, dirty grey rocks would peek out like tiny mountains, and the water was pure and cool.

The sun would occasionally peek through the trees and create speckled patterns on the trail, which would dance in the wind.

Almost all the birds I have heard in America either tweet, chirp, caw, cluck, cock-a-doodle, screech, squawk or whistle. Usually, it is only one or two notes or a short flutter. But the birds here, they sing multiple notes, various pitches, sustained tunes, and songs that ring and linger in the air.

At the top, the wind rushed over the peak, roaring past the trees and large radio tower. It also carried the scent of the forest we passed through, the salty water from the nearby peninsula, and chocolate (one of my flatmates brought chocolate and opened it at the top – the best way to say, “CONGRATS, you made it up!”). It was also much colder at the top and I was thankful I bought a thermal shirt the day before.

I am also glad I have a shockproof camera because I dropped it twice.

The moral of the story is:

An American in New Zealand