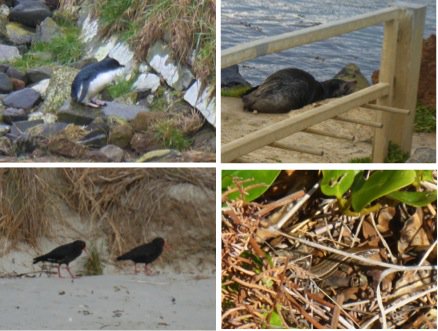 The peninsula that Dunedin is built upon is not just an ancient volcano – it is home to numerous unique animal species, making it the wildlife capital of New Zealand.

Some of the rarer wildlife includes the Blue Penguin, which is the tiniest penguin in the world and the fur seal, which has made a comeback on the peninsula in the last several years.

The black birds with long vibrant beaks pictured are called oystercatchers, and the tiny stripped lizard is called a skink. Other animals not pictured here but not uncommon to see are sea lions and yellow-eyed penguins.

“For someone like me who is from an area with abundant squirrels, deer, foxes, and other woodland creatures, this marine life is refreshing and exotic!”

The seals and sea lions are easily spotted sleeping on beaches throughout the day, and even though they look pretty clumsy on land, if you get too close, they can and will chase you with surprising speed!

The penguins are harder to find because they only come on land at dawn and dusk. There are tours to see them, but you can also randomly find them in you’re lucky.

The stunning beaches all over the peninsula are fair game to find such animals, and these areas also have exotic flowers and abundant seashells in all sorts of new shapes.

On the tip of the Peninsula is a place called Taiaroa Head, which is home to the only mainland colony of the Royal Albatross (there are colonies on some small islands too).

The Royal Albatross is the largest seabird, with a wingspan taller than the average person.

You can take a tour to view their nesting ground, and even though it was really misty when I went, we still got to see some albatross chicks! Their parents would occasionally swoop by, and it is obvious that their great size just makes them more majestic.

Albatross partners mate for life and raise a chick every two years.

In between mating, they spend all of their time flying or floating in the ocean. They fly all the way around the globe – from New Zealand past the tip of South America and back to Dunedin – before touching ground again.

Their enormous wingspan allows them to ride air currents for miles without flapping. They are an example of some of the amazing talents in the animal kingdom, and it was truly special to get to see one of the rare spots they call home!

Last but not least, a quick overview of the animals on the Peninsula would not be complete without some pictures of sheep and cows!

“It is estimated that there are 10x more sheep than people in New Zealand!”

New Zealand is a lead exporter in dairy, but it is the rolling green hills that are dotted with sheep that are iconic. This is because it is estimated that there are 10x more sheep than people in New Zealand!