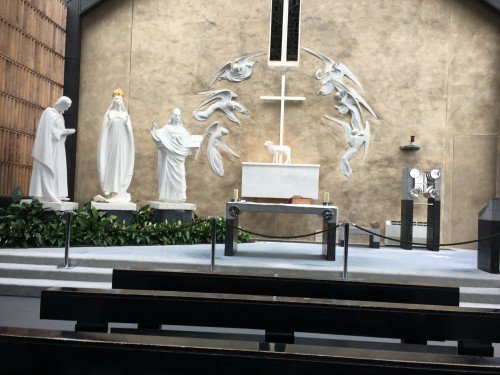 Moving to a new place to begin a new stage of life is such an interesting experience because it requires asking important fundamental questions about oneself and arriving at practical answers: how am I going to live? What kind of friendships am I going to seek? What will I do in my spare time?

As Aristotle taught in his Nicomachean Ethics, these questions must always be answered in light of the ultimate goal of life, which is to live for the truth. And when we do indeed live for the truth, our lives become integrated: the various things we do fit together almost seamlessly as our work, play, friendship, and prayer complement each other and conduce toward a life of abiding fulfillment.

It is with great gratitude that I can say I have loved my transition to Maynooth, Ireland, over these last two months as I have adjusted to a new country, school, and environment and as my life has developed an integrated, liturgical rhythm in service to the truth. On a typical day, I will rise at 6:30, head across the street to the South Campus of Maynooth, the home of the National Irish Seminary, and join the seminarians for lauds, meditation, and morning Mass. Around 8:30, I then return to my apartment to eat breakfast and to prepare for my classes in philosophy of religion, which has included modules ranging from medieval philosophy to conceptions of the human person from antiquity through the Renaissance to the philosophy of the 20th-century martyr St. Edith Stein/Teresa Benedicta of the Cross.

Later, usually after having gone for a run (the itch of being an alum of Duke’s Cross Country and Track team definitely needs scratching!), I return to the seminary at 6 for vespers and the Rosary and then have dinner with friends or in my apartment before finishing up some reading, reciting Compline, and retiring for the night.

On weekends, I have been able to explore other parts of the Emerald Isle. Trips to Dublin—just a stone’s throw away by train or bus (30-40 minutes)—are frequent, whether to visit my fellow Mitchell Scholars (where 8 are studying) or to join in the camaraderie and fraternity of the student brothers at St. Saviour’s Priory, the Dominican House of Studies in Ireland. One weekend highlight thus far was a trip with a large group of international students at Maynooth to Limerick to play in a Gaelic football tournament and visit the historic city in the west of Ireland. Gaelic football, sort of a combination of soccer, basketball, football, and rugby, is “good craic,” as they say here (meaning “good fun”). The whole excursion was a blast and a nice way to learn about Irish sport and culture with others who are similarly adjusting to life here. Another highlight was a pilgrimage with the Irish Dominicans to Knock, a boggy village in northwestern Ireland where Mary, Joseph, St. John the Evangelist, and the Eucharistic Lamb of God appeared silently on the gable wall of the town’s parish church to 15 people for about 2 hours on a rainy evening in 1879. It is one of the most famous Marian shrines in the world and a peaceful site of prayer and healing.

One of the Mitchell Scholarship’s fundamental purposes—and thus one of my fundamental purposes for being in Ireland — is to cultivate and establish enduring relationships between Americans and the island of Ireland. As I continue to build, with the help of God, an integrated life here, I find myself more deeply immersed in and connected to the ways of the Irish — between living in a new place, learning its history, settling into the Church, developing deep friendships, and engaging the culture.

Each of those has presented its fair share of unique challenges, though always accompanied by an opportunity for growth. With two joyful months down, I am thoroughly excited for what lies ahead. Sláinte!

This article was initially published on the Us-Ireland Alliance website.

Previous articleStaying put or returning home?
Next articleHow to Begin Networking While in College