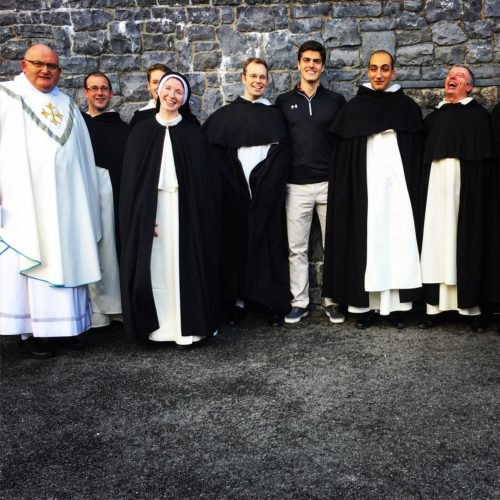 “The days are long, but the years are short,” goes the saying—referring to the paradoxical way in which individual days can seem slow and busy while months and years seem to whizz by. And, indeed, it rings all too true as I approach the end of my Mitchell year and begin to reflect on these rather extraordinary nine months in Ireland and this marvellous privilege to study for an M.A. in Philosophy on the George J. Mitchell Scholarship.

I cannot help but be overwhelmed with gratitude to the U.S.-Ireland Alliance, Maynooth University, the advisors I had at Duke, and many others for their efforts to make possible my time in Ireland. I also cannot help but be moved by how much has happened this past academic year – how much I saw and experienced, how much I grew, and how much I learned about myself, this great country, and my studies. To be sure, there were many long days (and several surely remain as I work to complete my dissertation), but they have all borne much fruit.

I came to Ireland in September eager to live in a new country and immerse myself in its culture and history; to dive more deeply into areas in philosophy that I had not previously studied; to meet new people and make new friends; and to emerge with clarity about what I wanted to do in the future. This was the first occasion in which I had ever really “started from scratch,” embarking on a new stage of life in an entirely new place, and that required trust – trust in the Mitchell Scholarship, trust in my program and professors at Maynooth, trust in myself, and, above all, trust in God, that amidst the variety of challenges and hiccups that one invariably encounters in life (and thankfully, those challenges have been, for the most part, small), I would be sustained by grace and ever-presented with opportunities for growth in virtue and the spiritual life.

In fact, the more I reflect on this year and how it came to be, the more clearly and beautifully I see the workings of Divine Providence. Heading into the fall of 2015, my senior year of college at Duke, I realized that I wanted to study for a Master’s in either philosophy or theology to ground myself intellectually and spiritually before moving onto other endeavours, perhaps law school, the private sector, or the world of academia.

Yet, at the same time, I began to sense in the silence of prayer the stirrings of an invitation to the priesthood and religious life – stirrings to which I was at the time not at all interested in paying attention! But, as it “just so happened,” I ended up being awarded the Mitchell Scholarship (which, at least in my case, involved plenty of good fortune) to study in Ireland for a one-year M.A. in philosophy of religion at the one university that “just so happened” to be across the street from Ireland’s national seminary – a detail I did not consider when I first applied to the Scholarship.

Within a few days of arriving in Maynooth, I had a meeting with my thesis advisor (in the philosophy department, which is separate from the seminary) that ran late, and it “just so happened” that a seminarian was scheduled to meet with her next. She warmly introduced us, and he ended up becoming a best friend.

In short order, and at my newfound friend’s invitation, I was heading over to the seminary in the mornings and evenings for the Liturgy of the Hours, Mass, and the common rosary, as I mentioned in my first blog back in November. All the while, those stirrings felt back in the fall of 2015 developed significantly, and my love for my studies, my love for the fraternal life of the seminary, and my love for the Mass and common prayer began to coalesce into a deep desire for the religious life – and especially that of the Dominican Order (the Order of Preachers), whose charism is precisely those three things: common prayer and reverent liturgy, study, and Christian fraternity, all of which conduce to rich apostolic preaching.

Then, at the start of the spring semester, it “just so happened” that a lay Dominican began a yearlong teaching post in the philosophy department at Maynooth to fill in for a professor who went on sabbatical on short notice. That Dominican tertiary taught me in a course on the thought of St. Thomas Aquinas, who was a 13th-century Dominican priest and is one of greatest, if not the greatest, philosopher-theologians in the 2,000-year history of the Church.

Given my deepened enthusiasm for the Dominican life and intellectual tradition – combined with my getting to know throughout the year the Irish Dominican friars, especially at their house of studies in Dublin – I ultimately decided that it was time for me to “take the plunge” and apply to the Dominican friars of the Eastern Province of the United States. I am grateful and honoured to share that I will head to Cincinnati, OH in late July to begin the novitiate year, which is the first step on the way to becoming a Dominican brother and a Priest of Jesus Christ.

As I look back on all of this, I am left in a posture of complete humility and awe. Of course, things did not “have” to work out this way, and it certainly is not as if I had no choice in these matters or as if God could not have worked through other intermediate causes to nudge me to this point of entering religious life. But the beautiful reality is that, in the circumstances that “just so happened” to present themselves, I was able to make, with the help of grace, free choices that led me, step by step, grace by grace, to arriving at a deep and abiding clarity that I should enter the religious life and that I should act on that conviction now.

Add to that the wide variety of joys that this Mitchell year has provided – from growing in friendship with and being intellectually challenged by my fellow Mitchell Scholars to connecting with the greater Maynooth community and immersing myself in Ireland’s rich cultural and historical heritage to travelling to various locations within the island and on the greater continent. Truly, it has all been one incredible experience. I will forever cherish this year, this island, the Mitchell Scholarship, and their profound collective impact on my life. Go raibh maith agat, Dia Leat! (Thank you, and God bless!)

Previous articleWhat to consider before a GRE retake, part I
Next articleWhen I Decided to Be Semi-Adventurous, Part 2