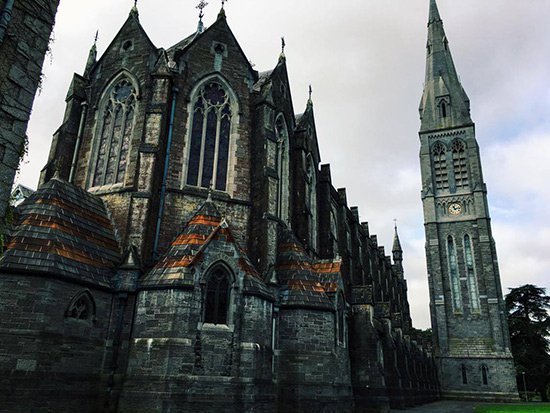 From the Desert to the Emerald Isle

Being born and raised in the Sonoran desert has its pros and cons.

On the one hand, temperatures soar above 100 degrees Fahrenheit with ease in the summer and you find yourself hibernating during the afternoon like a snake under a rock.

On the other hand, the people of Tucson, Arizona are people who know how to adapt, who can find the silver lining in a heat wave, make prickly pear lemonade out of lemons.

I love the lavender mountains that surround my city on all sides, the saguaros that look like people dancing, the monsoon season that turns Fourth Avenue into Noah’s Ark; but years of sunburns have given me an itch I can’t scratch, and my love for the baking ground is constantly at battle with my love for taking to the sky.

I hadn’t ever even flown until I was eighteen years old, fresh out of my first year of undergraduate school at the University of Arizona. The furthest I’d ever travelled was Mexico, (just down the street from Tucson, really) but I was determined to take flight.

I spent that summer after my Freshman year in Orvieto, Italy, and I’d have to start an entirely different blog to tell you all about that. In short, it was life-changing, and I was addicted.

I hadn’t come from the best of backgrounds, and getting even the slightest chance to travel, even just once, was unbelievable to me.

Not a single moment of my time abroad was taken for granted, and I knew that if I was going to travel again, I would go for as long as I could.

Flash forward to the beginning of my Junior year, and my friends were all starting classes at the U of A; buying books, comparing schedules, trying not to faint in the heat.

I was at home, packing up my room and booking my flight to Dublin, Ireland, just 30 minutes away from Maynooth University, where I would be spending my entire Junior year.

I couldn’t even give myself a moment to think about it, because if I did, I’m not sure I would have gone.

Despite loving to travel, I’m incredibly attached to my hometown, and all of the people I love in it. This was going to be the longest I’d ever been away. (Not to mention the furthest – like, across the world far.)

My family saw me off at the Tucson airport at four in the morning, and I got on the plane before I could change my mind. Over twenty-four hours later I touched down in Ireland for the first time in my life and knew it was where I was meant to be.

I’d never seen so much green in my life, that’s what I kept telling my friend who had come from New York and was on the bus ride with me to our school.

I didn’t know that much green could even exist. And the rain!

I was used to the rain forgetting I existed, pretending we had never met and then coming down in a torrent before breaking things off again. Desert rain, hit and run rain. This rain was constant, soft and bleeding, and I was in awe.

Maynooth University and I greeted each other like old friends and I lost myself in its castles and towers and green fields immediately.

It felt like taking a step back in time and I jumped.

Between settling into my Irish classes and adjusting to the cold, something that’s new but very welcome, time is already slipping by faster than I can keep track of. I know I have a whole year here, and I know how that year is going to fly by. I just take it a moment at a time, and never take those moments for granted.

Previous articleWhy Choose the UK for Your Engineering Studies?
Next articleThe Big Gig