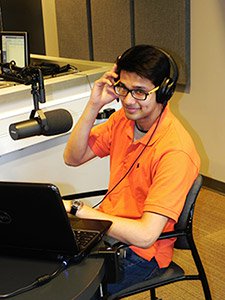 Zain Shafique
Zain Shafique is a computer programming student from Pakistan. He is studying at Durham College, on the southern border of Canada.
Facebook
Twitter
Pinterest
WhatsApp
Linkedin
Email
Print

Being on the radio for me is something that I have never thought of before, but I have always wanted to do something different.

The first encounter with the radio studio that I had was a few years back in my home country when I became a part of UNICEF ongoing projects for the flood victims back in Pakistan. At first, it was just a part of the project, I never got involved that much in the beginning. But after participating in a couple of shows I slowly began to be mesmerized by it. After a while, it seemed pretty exciting and fun at the same time.

Talking in front of the microphone while no one is looking can be a little frustrating in the beginning. I know for me it was, sure.

Honestly speaking, I was so nervous when I got to the studio for the first time. It was probably the overall surrounding effect. It was a big vacuum room with some fancy looking gadgets. Like I said it was a mixed feeling of nervousness and a little bit of excitement as well – and that’s probably the thing I enjoy!

When I came to Canada, I was a bit unsure about what to do as I was in a whole new system, but things got better gradually as I began to meet new people and started to go for different opportunities.

I was just walking down the hallway so I just stopped by the radio station. There, I was told about the auditions that were being conducted by Riot Radio. I thought it could be fun if I just, kind of, at least tried it.

In my auditions, I presented the idea of hosting a show for the international students and addressing the issues that most of the students face, as there is a huge population of international students currently studying in UOIT and Durham College. I had some intentions of making their life a little bit easier by guiding them about different possibilities.

This actually re-triggered my inside radio lover. I went to the auditions, presented my idea and guess what? They loved it as this type of show was never on air before! When I got the final confirmation after passing a test, I was actually pretty excited about it.

Now comes the big day, my first show was about to go on air and I started to get a bit nervous about it.

I had not been in touch with this radio business for a long time, but I had all the enthusiasm for this show because I really wanted it. But still, it was the radio effect which was happening all over again.

Finally, I walked into the studios after convincing myself to stay calm and relaxed. When the show began, I kind of remembered my previous encounters and just after a little while I could actually feel it was all coming back. So, I won’t say the show went awesome, but people sort of liked it.

That is my experience so far and after doing my first show I am feeling very confident for the upcoming ones. I hope it gets better eventually because now I know that I like doing all this.

My Journey So Far…