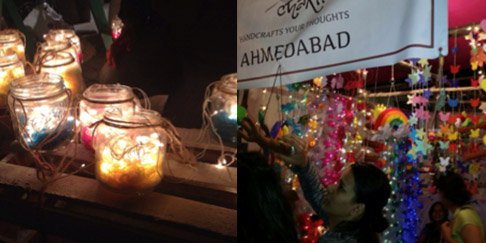 Someone once asked me, “If you do decide to go back to India, what do you plan to do?” I instantly replied, “I want to start my own business!”

Hearing this from an Indian girl shocked him, as the India that he has seen and heard about doesn’t support the idea of young women starting their own businesses.

Unfortunately, at that time, I couldn’t say much to change his perspective, as I did not know the current situation in my home country because I’d been studying in Canada at Humber’s Business School for a while.

However, today, after my most recent visit to India during winter break, I can proudly change anyone’s perspective with the same suspicion.

The Lil Flea in Bandra, Mumbai

During my visit, I went to The Lil Flea – a small flea market full of pop-up shops selling art and craft objects, clothes, accessories, bags, experimental and street food, in addition to shops of various online retailers and much more.

I attended this flea market in Bandra, which is a suburb located in West Mumbai, India.

Bandra itself is a very culturally rich area within the city. You will find people from every walk of life.

I guess it is not just Bandra, but Mumbai as a city has a place for everyone from famous Bollywood superstars to controversial politicians to ‘Aam Aadmi’ (The Common Man).

The Lil Flea truly gave a glimpse of my city. However, for all you who do not know what I am talking about, don’t worry! I managed to take some photographs.

There were approximately 200 pop-up shops in this market. Despite so many stores selling bags, accessories, and clothes, no two stores sold the same thing. I felt it was quite commendable as often in flea markets, I have seen similar things being sold at competitive prices.

Who said food should just taste good? All the food stalls served delicious looking food (and tasty too!).

One notable shout out goes to the Waffle House.

As the name suggests, it serves waffles but with a stick, which looks much like a Popsicle.

There were also budding artists who took the centre stage to make the evening much livelier.

Well, you must be wondering how any of this answered the question that was asked to me?

I did not attend this flea market to look for any answers.  But, surprisingly, my visit did answer the question!

Out of the 200 pop-up stores at this flea market, women entrepreneurs owned the majority of them.

The Lil Flea market, which was started by a few MBA graduates, filmmakers, engineers, and designers in 2006, is a team of 6 friends (out of which 4 are girls!).

Each year, this two-day market provides young entrepreneurs like them with a platform to showcase and promote their business to the masses in a way that they couldn’t have done otherwise. This year, the foot fall for this event was more than 30,000 people.

This is the same city and country that I left to pursue my dreams, which didn’t encourage entrepreneurs of any gender, let alone women.

Men in India are generally expected to be the sole bread earners of the family and women are supposed to be the homemaker who cooks food and raises their children.

Since men (rich or poor) are stereotyped as the sole bread earners of their families, they are not encouraged to pursue their entrepreneurship dreams as, in the majority of cases, they wouldn’t offer a fixed salary in the initial years.

I was indeed very shocked and proud at the same time to see so many young guns listening to their heart and pursuing their dreams relentlessly.

I saw a huge smile on one of the pop-up store owners’ mother’s face when suddenly, out of nowhere, there were at least 30 people (I was one of them!) standing outside the stall and waiting to order her daughter’s homemade dips.

She was a proud parent of a young entrepreneur!

This is very rare to see in a country like India, where girls are supposed to get married the minute they graduate. They are expected to raise a family and, in most situations, sit at home for the rest of their lives.

These businesses were owned by people in their early to late 20s.

This is the age when youngsters are often pressured to make their lives stable, which means getting a job that offers a fixed salary each month.

However, I won’t deny the fact that these people could also have a full-time job and that this entrepreneurship could be their side business.

Not everyone is born rich, and most of them might need money to keep the house running.

Yet, it’s a start and people are accepting the concept of entrepreneurship positively.

This was just one event and just a start in one of the cities of this huge country. But I can definitely say the young guns are definitely going in the right direction.

As someone had rightly told me, “Chase your passion and not the money as success and money will eventually follow you!”

Previous articleHow NOT to Throw a Snowball!
Next articleIf I Can, So Can You