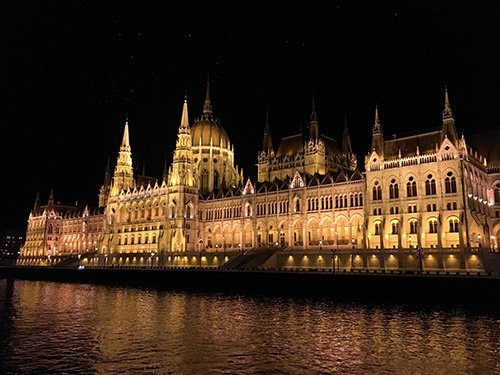 An Object in Motion Stays in Motion

As predicted, my time here in Ireland is flying by. Without realizing it, I’m already approaching my two-month mark, which is simultaneously exhilarating and heartbreaking, if those two feelings can conceivably share a space.

My friends and I like to point out little things we’re picking up subconsciously: Irish vocabulary and funny lingo, spelling words with “ou” instead of just “o,” the occasional accidental accent. (I recently told my mom that if I don’t come home with a full blown accent I’m demanding a do-over.)

Having found a comfortable routine and sense of normalcy in our new Irish life, my friends and I have set out travel as much as we can in our free time. Most recently, we spent a long weekend in Budapest with WSA, a student travel group. Joining a group of students from all over the world, we stayed in a party hostel and took on the city, led by a local as our tour guide.

I arrived late on a Thursday night, exhausted and carsick, and collapsed on my top bunk in the hostel room that I shared with thirteen other people.

I quickly became friends with a group of Australians that were rooming with me, and I joined them on that night’s event, a party boat going down the Danube river.

It was an incredibly fun and wild way to meet new people with vastly different backgrounds who were all managing to collide in the same city for one weekend, and the view down the river was breathtaking. Since it was dark out, every building we passed was lit up, and my pictures barely did it justice.

The next morning we woke early to begin our walking tour of the city, ending up at the thermal baths.

We all donned our bathing suits and ran through the icy October air to slip into the warm scented waters of one of their twenty different pools.

We soaked until we were wrinkly and completely relaxed, and then made our way to the chimney cake festival where we ate more than we should have. (It’s hard when every vendor you pass has sizzling posts of potatoes and onions and cakes are being fire roasted and doused in sugar right in front of you.)

The next day we perused the giant marketplace, eating lángos and shopping for scarves and nesting dolls to take home.

From there we went to one of Hungary’s largest underground caves and spent hours crawling on our stomachs through narrow tunnels, with nothing but our headlamps to keep us in check. (This is one way to quickly get over your claustrophobia, let me tell you.)

We emerged dirty and victorious, taking pictures in our oversized helmets and dirty jumpsuits. We ended the night with a pub crawl through Budapest’s ruin pubs, derelict buildings that have been transformed into bars, while remaining a little rough around the edges.

Visiting the synagogue and a cat cafe

Sunday was our last day, and we spent it meandering around the city, visiting the synagogue and ending up at a cat cafe. (I legitimately started crying when one of them came up to me. It had clearly been too long since I had been in the presence of an animal.)

I left early Monday morning, catching a six am plane to make it back in time for my class in Maynooth. I was drained and sore, but more content than ever.

It was our first excursion outside of Ireland, and it was a massive success. After some sleep and a shower, I was ready to go again, and I’m in constant awe of the fact that I get a whole year of this. Egészségére!