With a total of 8,644 international students enrolling at their higher education institutes in 2017, Norway appears to be a very popular country for students opting to a study year or term abroad.

Boasting beautiful natural settings and famous for its enriching and vibrant culture, Norway is hardly bereft of inspiration, especially so for art and humanity degrees, including English Literature and Language, Film, History, Drama and Philosophy.

Discovering more about studying an art and humanity degrees on a term abroad, I spoke to Chris Ahjem, a second-year English and Film student currently studying at the University of Sussex in the UK, who enriched his degree by taking a study-abroad term in Norway.

What made you choose Norway? What was it about this country that made you want to study here above any other place?

When considering a study abroad term, I mostly wanted to go to a foreign city in which I thought I’d have fun and benefit from. I settled on Norway for many reasons. Firstly, I’m half Norwegian by blood and have citizenship there so I already knew that the transition from the UK to Norway would be considerably easier than going to a land unknown. Secondly, due to my heritage, I really wanted to explore the culture of my father’s side of the family and perhaps even pick up some of the language to make communication with relatives easier.

What were you nervous about before going there?

Before going I was having a lot of pre-emptive FOMO (Fear Of Missing Out). I was worried that over six months away from my home friends I would miss out hugely and maybe even see some relationships deteriorate. I quickly learned that this was a worry with no real foundation. In an age of social media, it was so easy to message/call/FaceTime my home friends meaning I never truly fell out of the ‘loop’.

Similarly, with Oslo being only two hours from the UK, it was easy to visit home at Easter and see everyone. I was also rather nervous about having to start afresh and build up new friendships. However, it was easier to make friends than I thought. The University of Oslo had Buddy groups made up of international students set upon arrival and I easily found myself falling into a beautifully kind and fun crowd of like-minded students. I can say now that I’ve genuinely made friends and connections for life.

“I’ve genuinely made friends and connections for life”

How did Norway, or more specifically Oslo, enrich your interests in Film Studies and English Literature?

One thing I absolutely loved about the University of Olso was that I studied wildly specific fields of literature and cinema that I may not have had the opportunity to study elsewhere.

In literature, I studied post-colonial and colonial Caribbean texts as well as the theme of animals and animality within late-20th Century literature. Both were hugely fascinating areas of literature that I have a new-found respect for and hope to read more of in the future.

Likewise, I studied Scandinavian cinema and was able to explore the culture of Norway and its surrounding countries through it’s much smaller, but arguably richer, cinema than the likes of Hollywood. This provided me with a richer breadth of knowledge that I can use in future essays and work through references.

What were the best and worst bits about studying in Norway?

Norway was a hugely positive experience for me. I truly made incredible friends from all over the world – so free accommodation on holidays! Olso, itself, is a decently small but fascinating city. Filled to the brim with museums, art and culture it also has stunning parks, fjords and mountains which allowed for lovely trips and hikes. Plus, the locals are all so incredibly friendly, positive, and incredibly active.

On the other hand, however, the seemingly never-ending snow-filled winter and darkness in December through early April was quite a mood dampener. I obviously had fun during those times but it is hard not to slump occasionally when it’s basically pitch-black outside before your 3 pm seminar has even started. The weekly shop becomes a chore too; things in Norway are already inherently pricier with heavy import and health-related taxes on most produce and food, so what I would suggest is to set aside some extra cash on top of the Erasmus grant to ensure you don’t end up abroad with no money. Despite the exponential groceries, my university-regulated student accommodation was a surprisingly good value for money. I was able to get a nice room in a recently refurbished and well-equipped flat for the cost of a mid to low accommodation on Sussex campus. 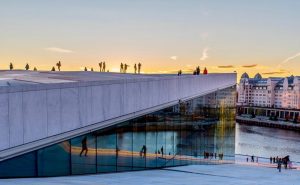 What would you recommend to those considering a study-abroad term, especially in countries such as Norway?

Honestly, you’ve just got to open yourself up fully to the opportunity and the people. If I was invited somewhere, I just said yes, even if it was miles out of my comfort zone. Never did I once regret going. The best way of doing this is taking part in as many Buddy week events, or your University’s equivalent, as these are overflowing with other students who are just as alone in a new place. You find people to have fun with and to support you. I would also recommend taking a language class for the language of the country you go to. Beginners classes like this are by default filled with international students that you can relate to and it’s a great place to meet new friends, especially as its much more frequent; I had language classes three times a week and it was a great routine to get into with people which expanded my friendships and created new ones.

I truly recommend living abroad even if just for a term. Sure, it comes with anxieties of being abroad, but it pays off with life-changing friends and experiences.

To read our interview with a Norweigan student studying in the UK, click here.

How To… Perfect your Curriculum Vitae for Employability