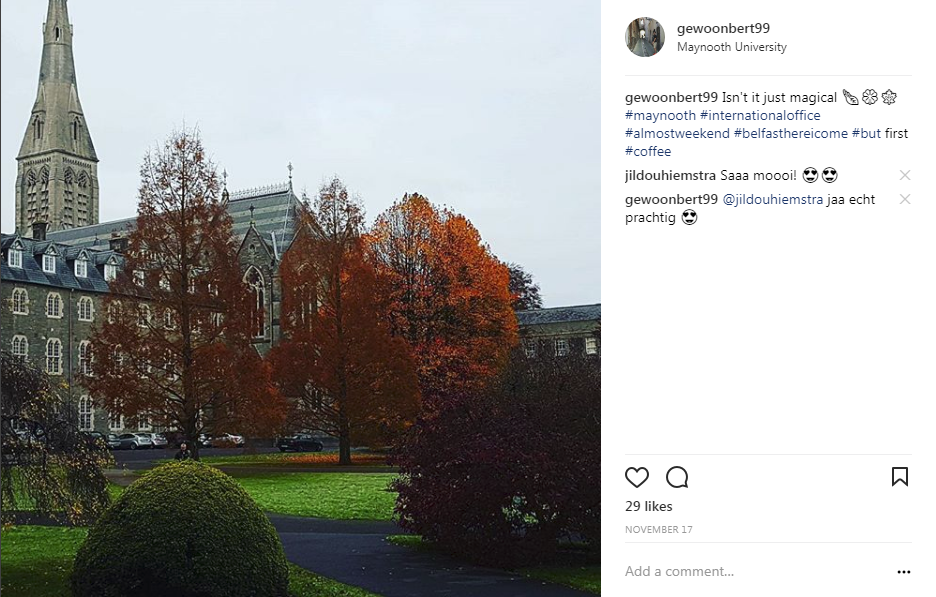 Made it halfway! But it’s actually a sad realisation, as I really do not want to leave Ireland yet. Anyhow, the month was great (again) and even the weather was pretty nice (even though certain people would not agree with this one). I discovered that November is really a month in which nature here in Ireland actually gets more and prettier. With all the trees turning red and staying red for at least a while, the scenery gets so beautiful!

So, what’s the best place to spend your time at the moment? Yes, in nature, so I did my fair deal of trips to Howth this month to enjoy the nature (and play tour guide for my visiting friends, who I truly love for all visiting me).

During my multiple trips to Howth this month I enjoyed the long and beautiful cliff walk, ate delicious fish and chips and (FINALLY) saw the seals, which was really cool! (Even though the cuteness disappeared a little after seeing them consuming huge chunks of fish…)

Besides making all the lovely trips to Howth, I’ve also done an international pub-crawl with a few friends. This was really nice, because we really needed to start discovering something different than Dicey’s Garden on the weekend ;).

Another great thing about the pub-crawl was that we could meet a lot of different people that are working/studying in Dublin too (and who, of-course, are non-Irish). Oh, the best thing of the pub-crawl was the free pizza. It’s always good to have some free food every now and then.

The rest of the month was filled with loads of cool stuff actually. I had friends over again (and again) and we went to Temple-bar (seriously, skip that one. There are much nicer bars in Dublin), had a lovely dinner at Mexico to Rome (which was absolutely amazing!!) and did a lot of sightseeing and shopping (which are always good things).

Something new and really nice that I’ve visited in Dublin was the Glasnevin Cemetery + museum. It’s actually really cool if you are interested in (graveyard) architecture and history/genealogy searches. Oh, and the best part, my Maynooth International Office colleague Pauline and I have bought plane tickets to go to Octoberfest in Germany next year with our German ex-colleague Lena (can’t wait!!)

I also visited Belfast during November. I did this with one of my colleagues and the UNCW students from the US. It was really nice and even though Belfast itself isn’t the prettiest city, the history is just so impressive (hey, don’t judge a book by its cover they say.

So if you ever come to Ireland, know a little about the history of Northern Ireland and want to visit two countries on one island, then definitely go to Belfast. One thing if you go, don’t forget to take pictures, because I did… sadly enough.

Another really cool thing was meeting the (step) son of my host family. In November he turned 21 so my host family decided to throw a little surprise party for him (and he had absolutely no idea) with balloons, friends and lots of food and beer. The night itself was really good and long. I honestly didn’t know that older people could party so long! This was definitely a night to remember.

Usually, I find November a very slow month. October is usually filled with loads of nice things and the same counts for December. However, here in Ireland, it went by so quick!

The best thing is, December is near now and it’s filled with loads of nice things! We have our Christmas office party, our lovely ex-colleague (intern) Lena is coming back for a weekend and it’s, of course, Christmas time.