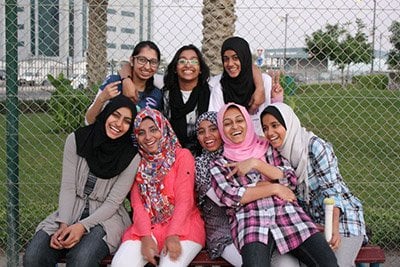 Middlesex to Humber – Dubai to Canada: Should I believe in Destiny?

If you are the kind of person who loves exploring new places and different cultures, you will be my friend.

You are a fan of good food? You will be my best friend.

If you also find it thrilling to go on adventures, especially participating in extreme sports, you and I are soul mates.

My name is Baneen Fatima and I am an international student at Humber College, Canada.

I was born and raised in Dubai, UAE; but I ethnically belong to Pakistan.

How did I happen to end up in Canada?  Well, it’s a long story.

You see, I have always been the baby of the family, being the only daughter among three sons. For the most part of my life, I have been protected by my parents and to some extent, by my brothers.

It didn’t help that I was a ‘go with the flow’ kind of a person, which meant that I didn’t really have a plan in life.

So, when I started my post-secondary education at Middlesex University, Dubai, I managed to select a degree program based on statistical evidence that pointed toward successful future jobs.

I know—I too was impressed with the amount of jargon used by the degree program and so, I completed it.

After I finished my bachelors at Middlesex, I tried to convince my parents to let me go and experiment with my life.

Even though I had gone to university for several years, I still felt dependent and protected.

I feared that if I didn’t push myself into a less comfortable lifestyle, I would never learn to cope with hard times. It may sound immature to some of you out there.

You may think that this person, in spite of having everything handed to her on a silver platter, still wished to face the harsher side of life.

You are right. That’s how my parents felt as well. So you can probably tell how difficult it must have been for my parents to let me go out into the big bad world all on my own.

But then again, how else would I learn to walk on my own two feet?

My mum used to say that if you want to learn how to fly, you need to push yourself off a cliff (not literally – duh!). It means that in order to do something amazing you need to take a leap of faith.

My leap of faith was coming and studying in Canada. I have never travelled or lived alone and initially, it was extremely difficult.

I had another second, third and fourth options in mind, but for some reason, Humber’s website spoke to me. The way it had its programs planned, even the facilities provided for us, clueless, prospective international students – all of it just spoke to me. And so Humber was my choice when I applied online.

Now, after many career counselling sessions and countless career type tests, I am studying Design at Humber, and I am pretty happy with the decision.

I finally feel that I am going to be doing something with my life.

Who knows if it was fate or destiny or mere coincidence. I like to believe that there was a reason why I chose Canada and a reason why I got into Humber. We will only be able to tell when time unfolds!

Until then, stick around!